What if the literacy revolution created the industrial revolution? 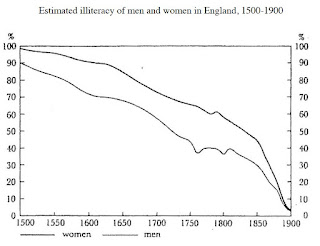 Tyler Cowen recently asked if we would have experienced the industrial revolution if something had prevented Britain from jumpstarting it. He points out Song China and the Roman empire seemed to come close to a breakthrough, but they never did.

I think the problem with this interpretation is it looks at the industrial revolution as a distinct technological phenomena, instead of the natural by-product of the literacy revolution.

After Gutenberg invented the printing press in 1439, the idea of publishing information spread like wildfire. It caused the cost of filling a book with content to drop by more than 30,000-fold, and the rate of publishing grew dramatically. This is what put Europe in general on the path to industrialization. Thanks to the printing press more European books were produced in 1550 (3 million) than were produced in all of the entire 14th century. By 1790, 20 million books were produced in Europe. At the start of the industrial revolution the number and variety of books/pamphlets in Europe reached levels truly unimaginable to Song China or the Roman Empire. You likely had more books produced in Europe in 1790 than produced in the three centuries of Song China.

This resulted in not only a dramatic increase in literacy rates before the industrial revolution but more importantly a dramatic increase in the value of being able to read. Thanks to this information revolution, if one person developed a great idea it could spread easily and allow others to build on it. It was not just the elites that could afford to write and share their thoughts -- even the lowly craftsman could have thousands of his specialty technical manuals produced. If you made a better gear, the world could hear about it.

From this perspective, while Song China and the Roman empire developed some prerequisite machinery, they didn't develop the literacy rates and ability to easily spread information that would be necessary to spark an industrial revolution. Neither empire was truly close. By the same logic it is likely if Britain didn't start the industrial revolution, another European or North American country with a massive literate population would have.
Posted by Jon Walker at 8:23 AM