Republican efforts to undermine, alter and/or repeal the Affordable Care Act expose one of the greatest logical failings of the law. Despite what supporters of the ACA claim, Obamacare did not make health insurance universal or treat health care as a right. The ACA still treats health care insurance as a welfare program that people either “deserve” or don't.


Forget what proponents of the ACA claim, the only thing that matters is the actual law -- and in cold legislative terms, the ACA makes it clear health insurance is simply not a right for Americans.


The ACA’s provisions clear define certain people unworthy of health insurance because of the choices they make. It allows companies to charge people who use tobacco 50 percent more than non-tobacco users. This surcharge could increase the cost of premiums by thousands of dollars making health insurance unaffordable. That is the point, to force people to choice between insurance or smoking. Not an easy choice given that tobacco is highly addictive.


Democrats left the door open, and now Republicans are driving a truck right through it. According to the Washington Examiner, Mick Mulvaney, Trump’s budget chief, believes that a “person who sits at home, eats poorly and gets diabetes” isn't worthy of receiving health care assistance. Similarly, Republican governors around the country are trying to add work requirements to Medicaid to deny poor people deemed unworthy of receiving this welfare.


Democrats claim to be outraged by these moves, but sadly the difference between Democrats and Republicans on this is only a matter of degrees, not principle. Republicans declaring people unworthy of affording health insurance because they drank too much soda or don't have a job is, in principle, no different than Democrats declaring that someone is unworthy of health insurance because they smoke.


Either affordable health care is a right that everyone should have access to with no exceptions, or it is a welfare program that the government can decide who is or is not deserving of. You don't lose your right to free speech or your right to freedom of religion, because you use tobacco or make other legal bad choices. That is the point of a right, it is meant to apply to everyone.

If Democrats believe health care is a right, then they need to treat it. Obamacare didn't and it is time for Democrats to admit that and promise to change.
Posted by Jon Walker at 10:48 AM 5 comments:

Since the failure of the Republicans' efforts to repeal the Affordable Care Act, Democrats have started new pushes for letting people buy public insurance. While I'm glad to see movement in this direction, the three most prominent plans offered so far are just worse, limited versions of a public option. There appears to be no obvious political or policy reason for offering a worse version.
Depending on the details, I think all of these proposals would make our system marginally better, but I fail to see the political or messaging logic behind any of them compared to pushing for a universal public option/Medicare buy-in.

While limiting public insurance proposals will likely do nothing to reduce industry opposition, it does reduce popular support. All of these plans would potentially benefit fewer people than a universal public insurance plan, which means fewer regular people will have a reason to fight hard for them.

In addition, the message for a public option/universal Medicare buy-in is simple: private insurers suck, so we will let you buy public insurance instead. The messaging and logic behind these plans make little sense.

If private insurance doesn't work well for people at age 55, why isn't it a problem at age 54 or 53? Why shouldn't everyone else get also get to buy into Medicare?

Similarly, if we think people would benefit from a "Medicaid buy-in," why are we leaving it up to the states? This is an especially important question after we saw so many red states reject the Medicaid expansion.

Limiting the proposals isn't going to generate Republican approval either. As we just saw with Obamacare, Republicans will attack any proposal as a "big government takeover" regardless of what it does.

I understand making tough compromises to achieve goals and broaden the coalition, but there seems to be zero logic behind these compromise proposals. These plans are needlessly limited but gain nothing.

These limits won't fool the industry. They won't fool Republicans. They will only excite less of the base. And they will make it harder to sell, since the plans now lack simple, cohesive logic.

Can someone point to one reason why any of these plans would be politically easier? Can someone name one powerful industry lobbying group or bloc of voters that you gain by imposing needless limits on a Medicare buy-in? An universal Medicare buy-in already has overwhelming support.

Posted by Jon Walker at 8:24 AM No comments:

Where is the Progressive push for an ERISA Waiver?

Progressives in Congress seem to have dropped the ball on what could be one of the most important health care deals of the year. The best hope for future progressive state health care reform might slip away without anyone on the left even noticing.


Currently, there is talk around a small bipartisan health care reform package. The potential proposal mainly contains Republican promises to actually continue to implement the ACA’s cost sharing reductions in exchange for a modification of the law’s Section 1332 State Innovation Waivers. That would let red states relax some of the law’s regulations. Overall, this is a terrible deal for progressives, but there is a chance to make it fair.


If progressive Democrats insisted any deal that changes ACA state innovation waivers also include the ability to waive parts of the Employee Retirement Income Security Act of 1974 (ERISA), it would be a true ideological compromise and one that could be deeply important long-term. It would achieve the conservative goal of returning more power to the states and make progressive state reform possible.


ERISA effectively prevents states from doing anything to regulate large employer health insurance. It has been a major hindrance to state health care reform efforts large and small over the decades.


For example, back in 2007 a Maryland law to make large box stores provide health insurance was overturned because it violated ERISA. Similarly, last year the Supreme Court threw out a Vermont law that would create an all-payer claims database. Without states even being able to gather basic data, it is almost impossible for states to seriously consider any reforms based on liberal or conservative principles.


ERISA would likely be a massive legal and financial hindrance to any state single payer effort, but it also prevents more modest reforms that move in that direction.


For example, Hawaii’s employer mandate is the only state law exempt from ERISA because it was approved before the federal law. The Hawaii law is highly effective, keeps costs low, and it is popular; but for four decades no other state has been allowed to copy it. Similarly, states’ attempts to make American health care more like the Swiss health care system with its all-payer system would likely face ERISA issues.


If any group or politician claims to really want state single payer but isn’t actively fighting to get an ERISA waiver included in any deal, they are simply not serious about the politics or the policy.


Achieving state single payer would be a major undertaking that will require winning numerous fights, but this is one of the most important and easiest. If the progressive grassroots isn’t even trying to fight for it right now, they might as well just give up entirely.
Posted by Jon Walker at 9:43 AM 1 comment:

Three charts show why we can't move on from health care

Now that the Republicans' repeal and replace efforts have failed, you are seeing some on the left suggest that progressives move on from health care. The general idea is that the ACA is good enough, health care is hard, and Democrats should focus on other progressive policies like universal pre-K or paid parental leave.

The most prominent example of this thinking comes from Paul Krugman, who calls for Democrats making only small tweaks to the ACA:

Meanwhile, progressives should move beyond health care and focus on other holes in the U.S. safety net.

When you compare the U.S. social welfare system with those of other wealthy countries, what really stands out now is our neglect of children. Other countries provide new parents with extensive paid leave, provide high-quality, subsidized day care for children with working parents and make pre-K available to everyone or almost everyone; we do none of these things. Our spending on families is a third of the advanced-country average, putting us down there with Mexico and Turkey.

The reason progressives can’t move on from health care, even if they wanted to, is that our out of control health care industry will eventually eat everything.

The money that should be going to social programs for education, transportation, and children is effectively being stolen by the health care industry.

We could have Norway-level social programs without new taxes if we had Norwegian health care.

This is a problem which is only getting worse, not better. Large employers say insurance costs will grow by 5 percent next year, faster than the rest of the economy. The cost curve is unbent. 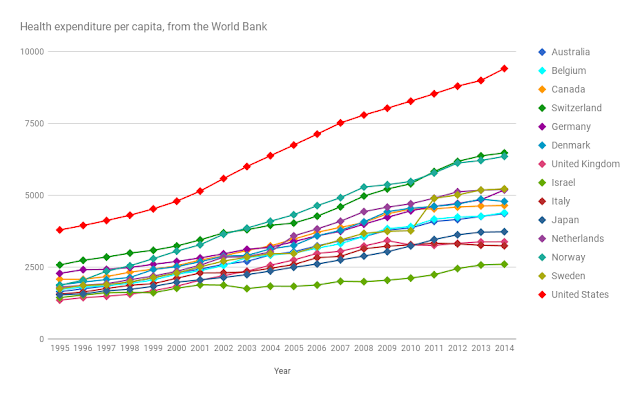 Even if we did create social programs like universal pre-K or paid parental leave, it is likely the ever-growing cost of health care would eventually force them to face cuts.

No social service is safe as long as health care demands a larger and larger share of the budget. Democrats current rally around free college, but that is something we effectively already had in places like California a few decades ago with the University of California system. The problem is health care kept starving the public system of money. Bring down health care costs, and California could reverse this trend. The Government Accountability Office makes this problem clear trend. 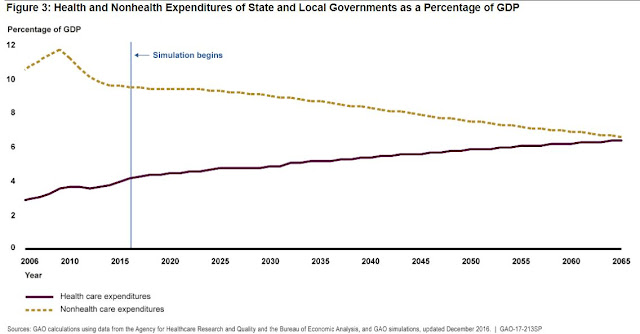 Contrary to what Krugman says, we need more than “incremental improvements in the A.C.A.” His comparison of Obamacare to the Netherlands is deeply misguided. While the ACA superficially resembles the Dutch system, it lacks the significant government cost control measures on providers and drug makers that the Dutch use to keep their spending only barely in line.

These are policies doctors, hospitals, and drug makers in America would heavily oppose. Pushing America towards Dutch-style health care would be a monumental reform effort that would face the same opposition from the health care industry that single payer would.

At some point progressives are going to need to make the health care industry stop ripping off the American people. If we don’t, all other social programs that cost money will be swallowed by this ever-growing blob. Every progressive social program is in danger until we really deal with health care.
Posted by Jon Walker at 8:33 AM 6 comments: