Why Silicon Valley and the Bay Area make me so depressed

I'm spending Christmas vacation with my fiancee's family in San Jose, and while I'm having a very nice time enjoying the sunshine, the whole Bay Area always makes me very pessimistic as a policy expert.

Whether you claim to care about global warming, income inequality, and/or improving public health, what you should really want to see is a huge housing boom in the Bay Area based around building new walkable urban centers. The mild climate means houses and apartments in the area need to use relatively little energy for heating and cooling. The climate also means that if new communities were built densely enough, it would be easy for people to walk or bike to work, which is both very good for the environment and for individuals' health. Finally, more housing in the area would allow more people to take advantage of the robust local economy.

Since the Bay Area is full of liberals that claim to care profoundly about these issues and highly educated tech companies that say their goals are to improve the world with things like shared economy apps and green tech, a massive push for new urbanization in the region should theoretically have huge political support here. Yet despite the money, the need, and the space being here for such a change, it is only the lack of political will holding it back. For example the very wealth city of San Jose has less than half the population density of Philadelphia and if Oakland simply had the same density as San Francisco there would be room for an extra 600,000 people in the area. In fact, the Bay Area is producing new housing at a truly pathetically slow rate. Instead, people in the area are fighting more urbanization based on nebulous, selfish goals like preferring the look of ranch houses or just not liking change.

Even in a place where the people and companies claim to care about improving the environment, people aren't willing to embrace change or just aren't capable of building the local political will to back proven solutions. That makes me very pessimistic about the ability of good policy to win.

What if big brains are just too heavy to get to space?

I have an interesting possible solution to the Fermi Paradox. To put it simply, the paradox is that it seems there should be millions of planets that could support advanced life but we have seen no evidence of other advanced space faring life in our galaxy.

Let's assume that, for the most part, the caloric cost of a large brain remains roughly the same regardless of gravity, but the cost of physically moving it would change dramatically. On Earth our gravity makes it worthwhile for many animals to expend a significant amount of calories using their brains to think before they spend calories on moving around, but low gravity could tip the balance the other way. Imagine an Earth-like planet but with half our gravity. There, using basic instincts combined with extremely quick reflexes might be the dominant strategy. With the cost of moving reduced, the value of thinking about the best action beforehand would be diminished.

On a planet with twice our gravity, it might make even more sense, in terms of evolution, to favor spending precious calories on thinking over moving. This would imply intelligent life would be far more common on larger planets, but the problem is every small increase in gravity makes it dramatically harder for intelligent life to build a rocket ship or a space elevator to get off the planet.

Maybe the Goldilocks level of gravity for the development of a space faring civilization -- heavy enough to encourage the evolution of intelligence but light enough to be able to easily build space vehicles -- is very narrow.

It is possible there are thousands or millions of civilizations out there which are effectively trapped in their gravity wells.

I recently finished my first sci-fi novel, Cobalt Slave. Please go to Kindle Scout to nominate it. It is free, and if my book is selected you will get a free copy of it!

Posted by Jon Walker at 8:22 AM No comments:

Please help me with my first novel, Cobalt Slave 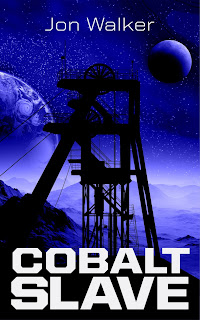 I have some exciting news! After a year of intense work I have finally finished my first science fiction novel, Cobalt Slave, and I would love your help to make it a success.

I chose to submit my book to Kindle Scout, a program through which Amazon chooses new, independent books to publish and promote. The more people who vote for a particular book, the more likely it is to be selected.

The best part is it's free to "nominate" any book, and if Cobalt Slave is selected you will get a free copy from Amazon.

Right now you can read the first several chapters of Cobalt Slave via Kindle Scout -- if you enjoy them, please nominate it. It only takes a minute to nominate a book, and your support would mean a
lot to me.
Posted by Jon Walker at 9:52 AM No comments: Last week President Obama took a small step which may help assure the long term survival of humanity. He signed into law the Space Act of 2015 which gives private companies the rights to keep anything they mine from an asteroid.

As long as all humans are living on Earth we risk society collapsing or even extinction from a single nuclear war, super plague, or massive meteorite strike. Having a viable human population living just off planet is the best insurance policy, but creating that would require an incredible amount of energy/money.

There are basically three ways such a massive undertaking would be funded. A government could foot the entire bill, a crazy rich individual/organization could pay to send hundreds of people into space for ideological reasons, or it could be the byproduct of a profitable private business venture.

Creating a clear legal framework for asteroid mining helps increase the chance the third option will be used. While some people left Europe for religious and ideological reasons, the big driving force behind the colonization of the New World was the search for profit. It is likely that will be the main driver behind colonizing space.
Posted by Jon Walker at 11:25 AM No comments: