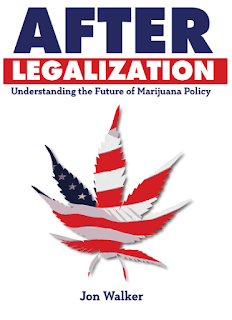 Last night my predictions for the presidential election were way off (so were those of every data-driven election prognosticator), but my marijuana reform predictions have done very well. I wrote three years ago in my book After Legalization: Understanding the Future of Marijuana Policy:

2016 – This is the year the tidal wave is going to hit. If current polling trends hold, national support for marijuana legalization should rise to well over 60 percent by 2016. Marijuana reform groups are already planning to take advantage of this presidential election year to make their big push. There are likely to be ballot initiatives in Arizona, California, Maine, Massachusetts, and Nevada. If a well-crafted initiative makes the ballot in these states, they are almost guaranteed to pass. As of 2013, local polls showed there is already majority support for legalization in all five of these states, and support should continue to grow over the next three years.

Of these states, I suspect the biggest impact of legalizing marijuana will come in Massachusetts. California, Colorado, Washington, and Nevada all have relatively self-contained metro
areas—relatively few people commute daily across their borders. Massachusetts, on the other hand, borders five other states, all of which have significant populations close to the Massachusetts
state line. In about 30 minutes, you can drive from Manchester, N.H.; Providence, R.I.; Hartford, CT; Bennington, VT; or Albany, N.Y., to the Massachusetts border. The majority of people in New Hampshire and Rhode Island live less than an hour from the state. Legalizing marijuana in Massachusetts would make it foolish for the rest of New England to keep it illegal. All these other states have already decriminalized possession, so the real question they will face is whether they’ll
let the tax revenue flow to Massachusetts just to maintain an unpopular prohibition that has clearly failed.

With marijuana legalization on so many ballots during a presidential election year, including the potentially important swing state of Nevada, the major-party candidates will be forced to address the issue. I don’t expect a major presidential candidate to fully endorse legalization that year, but the politics of the situation will likely force them to publicly favor a hands-off approach by federal agencies. Neither party can risk pissing off young voters, and promising to leave states alone is very popular with both the Democratic and Republican base. This is the kind of half-solution, designed to try to please everyone without directly committing to anything, that politicians in tough elections are drawn to like moths to a flame.

Marijuana legalization initiatives were on the ballot in Arizona, California, Maine, Massachusetts, and Nevada. These legalization measures won in every state but Arizona.

In addition, neither Donald Trump nor Hillary Clinton endorsed marijuana legalization but both took a hands-off position when it comes to state legalization efforts. During the campaign, Trump said, "In terms of marijuana and legalization, I think that should be a state issue, state-by-state."

I also predicted that Canada would legalize marijuana in 2017 and that is looking increasingly likely.
Posted by Jon Walker at 9:54 AM