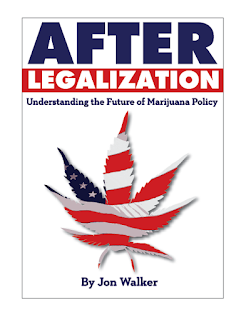 Back in January of 2014 I published my first policy book, After Legalization: Understanding the Future of Marijuana Policy. In the book I try to predict what is likely going to happen over the next 20 years in marijuana policy. I'm going to take a moment to look back at some of the big predictions I got right and those I got wrong. So far three of my larger predictions have already come to fruition.
I have gotten a few things wrong, though. I predicted there wouldn't be a legalization measure on the local ballot in D.C. until 2020, because I thought pro-legalization groups would be worried about congressional interference otherwise. This prediction was only half right. The voters of D.C. did vote overwhelmingly to legalize marijuana use in November 2014, but in response Congress adopted a budget rider that has prevented the city government from implementing a tax-and-regulate system.

I similarly didn't expect Ohio to vote for marijuana legalization until 2020, but Ohio may actually legalize marijuana much earlier. With just a few weeks until the election, polling currently shows Issue 3 is tied 46 percent yes to 46 percent no. If Issue 3 fails, there is a good chance different legalization measures might appear on the ballot in 2020 like I initially predicted, but I would prefer not to be proven right that way.