Among people who support the Affordable Care Act, there are many who want to give it credit for the recent slowdown in health care spending, but data supporting that position has a big weakness.

In the broadest sense, there are two things that can cause health care spending in a country to change. The first is national factors, such as major health care legislation or new federal policy. The other is international factors, which you would expect to impact health care in basically all first-world countries, such as a slowdown in new blockbuster drug development, more effective medical techniques, new worldwide epidemics, new diagnostic tests, etc...

With that in mind, take a look at this chart from the World Bank of health care spending as a percent of GDP: 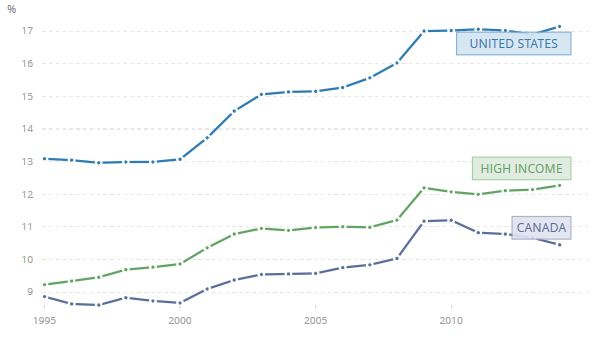 While there was a clear slowdown in U.S. health care spending that started around 2010, when the ACA was signed into law, you also saw a nearly identical worldwide slowdown at the same time. Looking at this chart, your first thought wouldn't be, "the United States must've done something unique starting in 2010." Your first thought would be that the United States tracks first world spending patterns almost perfectly, just at an absurdly higher rate. If you didn't know America approved a major health care law in 2010 that was meant to deal with costs, you wouldn't have guessed it from looking at this chart.

Provisions of the ACA might indeed be having a positive effect, but you should be cautious about giving it all the credit or even most of it. Policymakers run the risk of learning the wrong lessons.
Posted by Jon Walker at 8:13 AM